There is a lot of debate as to whether “skin purging” is real or not. Some say it does happen, while others claim it’s just your skin breaking out in response to a new product you just started using. So which is it, does rosehip oil make your skin purge? So what does this mean for us? Well, it means that, if you have clogged pores, they may turn into active acne, and if you already have acne, they may become more severe.

Skin Purging VS Breakouts – What Is The Difference?

The main difference between skin purging and an adverse reaction to a new product is the duration of the breakouts. I’ve had this happen to me when I first became a bit more aggressive cleansing my face.

You will notice your face starts to breakout more than it did… at one point I began to panic as things seemed to be getting worse and worse. But, as time went by (right about the end of the fourth week) the skin on my face started to calm down. It was a gradual process, but I started to notice significant changes for the better.

I know that waiting for four weeks may seem like an eternity to you, especially if you are breaking out, but you need to be aware of the fact it takes our skin cells 27 to 80 days to renew completely. This number will, of course, depend on the age, but if you are right around my age (30 years old), it will probably happen a between fourth and fifth week.

So, you’ll have to be patient and wait it out. And if your skin continues to break up after five weeks, it might be a good idea to consult your dermatologist.

What Ingredients Cause Skin Purging?

As for rosehip oil, it contains a high level of linoleic acid, another active ingredient known to cause skin purging.

How To Tell If Your Skin Is Purging?

This is a tricky one. Skin purging (from rosehip oil) and breaking out due to a newly introduced skincare product is relatively similar. Both will cause acne, and make your condition worse. So, how do you spot the difference?

One thing is for sure; if your product does not contain any active ingredients (which we covered in the section above), your skin will not purge; it is just an irritation signaling you should stop using it. 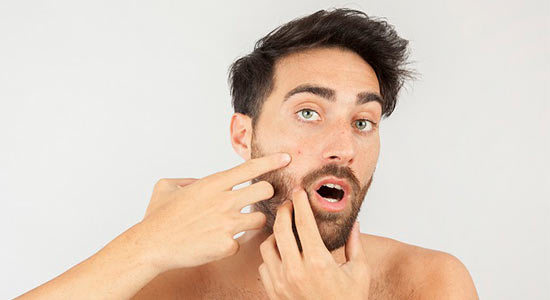 Skin Purging VS Irritation and Breaking Out

Skin irritation is easily distinguishable as it will make your skin feel hot, tight and give you a burning sensation. You might also start to notice small, itchy, red patches on the skin of your face. This is a clear sign of an adverse reaction to a product you are using, and you should stop immediately.

Another thing to keep in mind is the appearance of acne breakout outside the area you applied the skin care product to. If you notice acne breakouts in places you don’t usually get them, this may indicate that something’s wrong.

An allergic reaction is also something you’ll have no problem spotting as it will present itself with tiny, itchy bumps all over your skin.

Whatever you do, make sure you don’t scratch these bumps as it will only make things worse. What you need to do is stop using the product which leads to the allergic reaction and contacts your dermatologist to calm your skin down as soon as possible.

How Long Does It Take For Skin To Purge?

I can’t give you the exact number as it will depend on your age, but if you pointed a gun at my head (which I hope you wouldn’t), I’d have to say skin purging from rosehip oil will usually last anywhere from 4 to 6 weeks.

And if the intensity of your breakout does not start to dial down by the end of the 4th or 5th week, you should probably ditch it and go for some other product.

Is Rosehip Oil Skin Purging Good For Your Skin?

From my point of view, skin purging is excellent for your skin. As I’ve said in some of the previous paragraphs, skin purging is just accelerated skin exfoliation, rejuvenating your skin and bringing all the impurities, dirt and bacteria out into the surface.

The only downside to skin purging is the fact it can go on for as much as 4 or even 5 weeks. But is that really a high price to pay for improving the health and appearance of your skin? I don’t think so; I say you welcome it and endure the short-term pain for the long-term gain!

How To Minimize The Severity Of Skin Purging?

All in all, purging is not the most pleasant feeling, and it will waken and make your skin vulnerable. So, during this time, you need to take extra good care of it and make sure you nurture it properly so that it recovers faster.

Here are some of the tips designed to help your skin get through purging from rosehip oil:

How Often Should You Use A Clay Face Mask?